..they were only $60 so I picked one up. Plugged it in and boom..working like a charm!

It’s lighter and quiet compared to the other one..we will still attempt to fix it but we want to use it more for brush and this one for just grass.

..and it melted. Puuuuuuurfect. That was a splendid 10 minute exercise…looks much nicer short.

..darg…only 1/5 done. The head was flopping around like crazy as I was trying to cut..I was not sure what the problem was..inferior product comparded to my regular snipper. 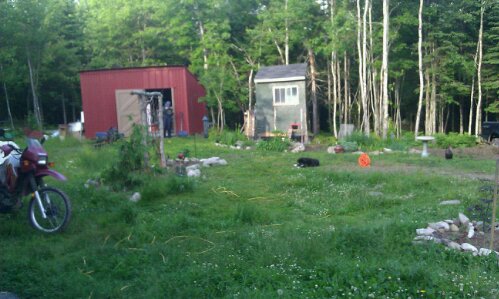 Posted by eagergridlessbeaver on June 27, 2011 in Purchases, todo

Went for a walk..and as I was leaving there was a deer right at the bottom of my driveway..no picture of her but when she skampered she left this panic track behind. She took off in a hurry.

The rest were other tracks on the walk..many deer and raccoon tracks..it is much easier to pick out tracks in winter! 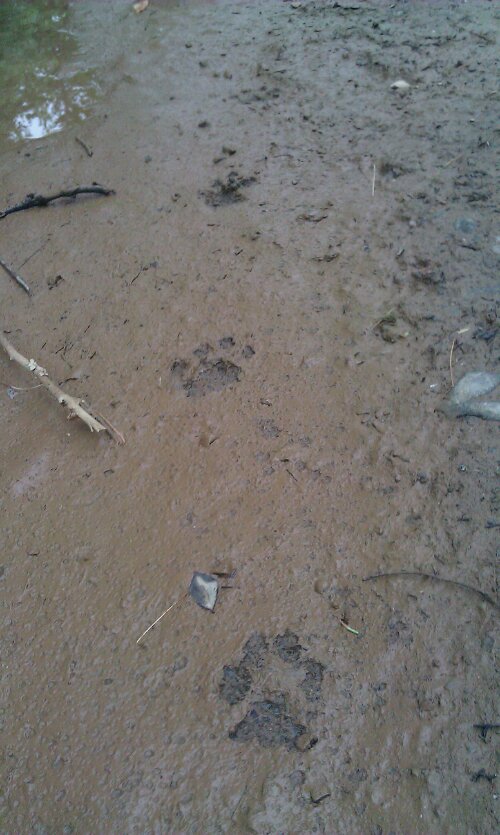 Also..someone was kind enough to leave me some campfire wood on my old driveway. Looks like an old bar. How thoughtful!

Posted by eagergridlessbeaver on June 25, 2011 in Animals, Pests

I wanted to say that I started task #3 so I pulled off the covers to the stacked  pine boards. All started! hehe. Anyway..I took off the cover and this huge guy was there..this is one of the most aggressive type of snakes in the area..capable of taking down a full size baby toad. Beware!

OK..really he was about 1.5 ft long. A Garter snake..pretty well the only type of snake around here that I have ever seen..with the exception of a ring-neck snake. Both never get very big. When I saw him I told Jango that there was a squirrel up on top of the pile so he jumped up..and then freaked out. I don’t think he has ever seen a snake. The snake fell into the grass.. 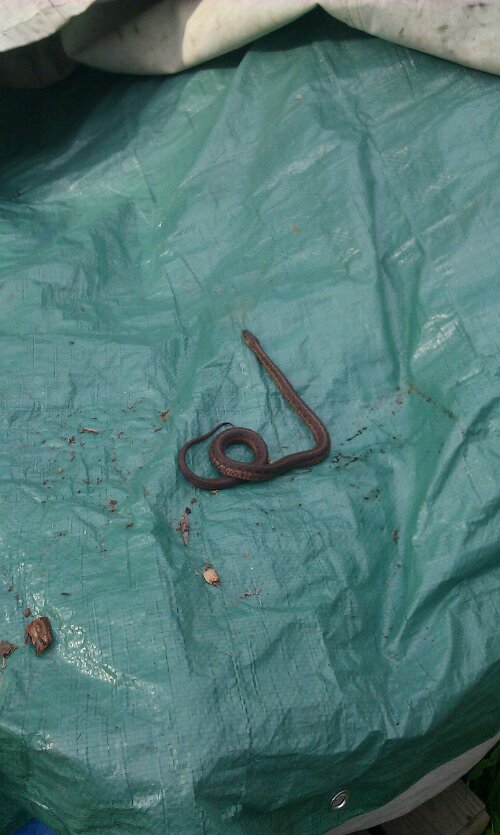 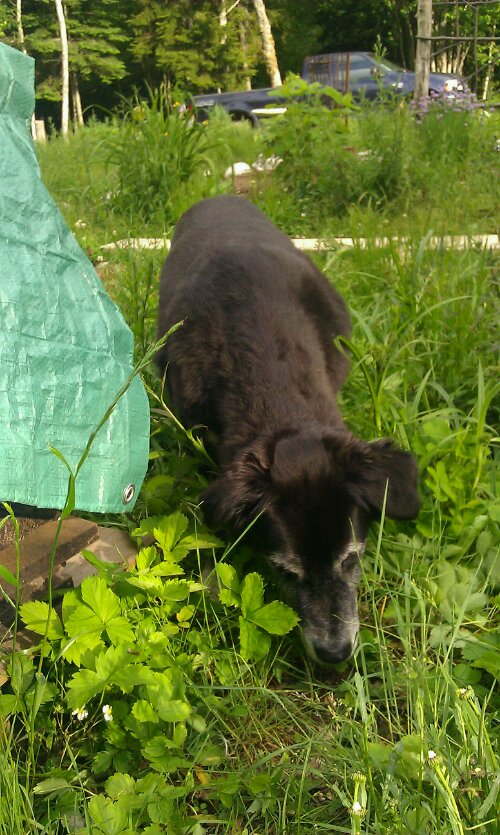 And for the next 5 minutes Jango was literally looking where he stepped and though every tall piece of grass was a snake…I have never seen him so nervous. That lasted 5 minutes then he stopped looking where he was going and was bounding around the woodpile again like he had never seen the snake in the first place..the joy of a dogs memory..ignorance is bliss.

And the uncovered wood..the first thing I need to do is square off this batch…I am going to take off the edges and then begin making it all smooth..this time we are going to do it all then put it all in..not like the bedroom..We learned so much on that project and I don’t want to make the same mistakes twice. 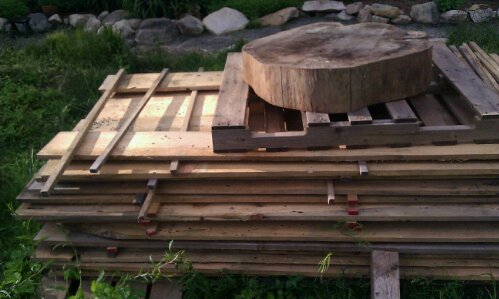 The humidity of the wood is near perfect..give it a couple more days then I will start..hopefully this weekend if the weather is cooperating. 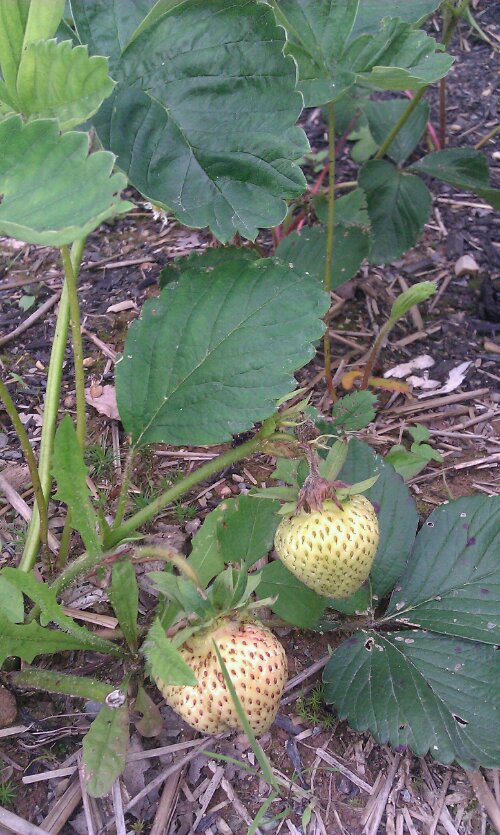 And miracle of miracles..something is growing. This is near where the rabbit has been hanging out so we will see if these ever get to the point where they are red..they certainly are big enough..small patch so far but it keeps extending every year…

Posted by eagergridlessbeaver on June 22, 2011 in Animals, Construction, todo, Wildlife

Stupid tire on the wheelbarrow..it has actually been flat’ish for 6 months and I have had it with it..slow leaks..lost tire pumps….we switched up and went with an ‘indestructable tire’..no need to put air in it to fill it..it is solid. After I took off the old and put on the new I was amazed at the difference..night and day. My whole lawn is rocky and many times I would be travelling with a load of soil or wood and the tire would not be fully inflated and I would hit a high rock and slam my shin into some exposed metal. I LOVED that! 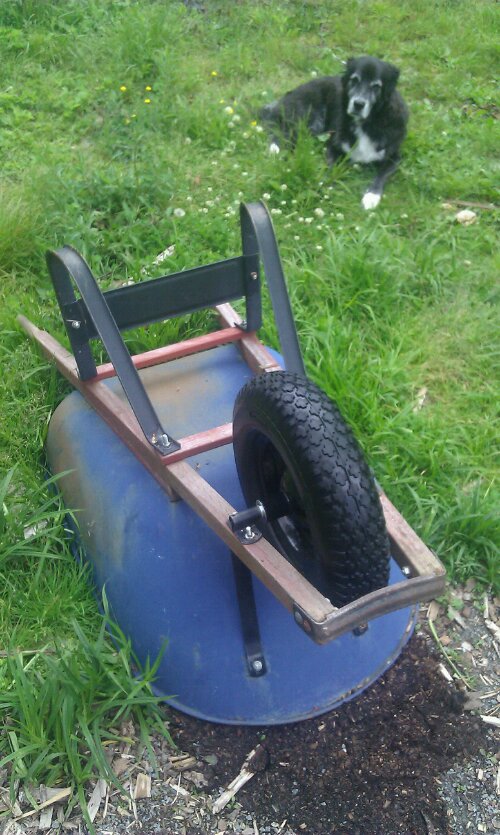 One out of one dogs agree that new wheelbarrow tires saves peoples shins. So..after I got the tire on it was onto some other awaiting tasks..re-piling the wood. I actually had a bunch of photos taken over the weekend but my stipud camera decided not to store them. Anyway..the long and short of it is that A* and I restacked the wood. Its too bad we did not have those pictures as A* was doing tricks and stunting..at one point we we krunkin’ on top of the woodpiles to some hardcore beats. OK, so none of that happened and I am not 100% sure what krunkin is..I think it is a dance. 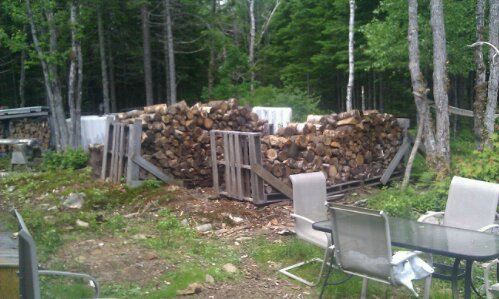 There were MANY pieces from over the last 3 years that I have been putting aside due to being impossible to split for whatever reason. I set those ones aside during the stacking process and then I took the big pieces and put them around the firepit via the wheelbarrow..this way when I have guests we won’t have to search for wood..I really just should have stacked it but A* and I like to get ideas for what we want an area to be in the future..last year we laid out the flower beds with wiring before we started digging..so it at least seems like we have a plan!

Yeah yeah..the whipper snipper still needs to go into the shop. That is another set of photos this stupid camera lost..I was attempting to fix it last week and Jango chased a rabbit right through my legs as I turned to see what the commotion was about!..I did not have a picture of that though..it happened and ended so fast that there was no chance for pics…Jango lost the rabbit after .5 seconds..he is no prolific hunter.

Posted by eagergridlessbeaver on June 20, 2011 in Animals, Construction, todo, Wildlife

A* was out at my Moms last weekend when I was camping. When I got home and asked what she had been up to she mentioned that she had ‘..done some yard work at your Moms..’ What that really means is that she cleared out some more annuals and I came home to 3 heaping bags of annuals that needed a place to live. We are actually running out of room in the more established flower/shrub beds..there is room in 1 but I need to go in with the pick to loosen it up and add some compost…so we chose down at the end of the driveway. It has been more of an overflow area for our stuff. We chose an area near the top of the hill and I started digging..after digging the hole for the Japanese Maple this was a breeze! Almost no rocks! To do this small bed might have taken me 15 minutes. After excavating we added some compost and mixed..then the planting began. 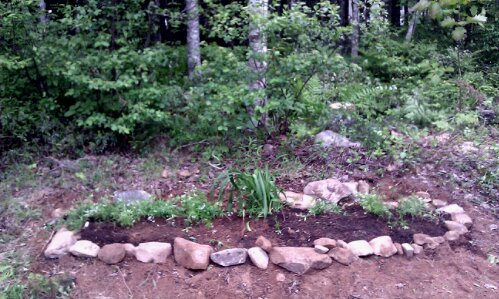 The idea for us is to keep on filling this area near our driveway..SInce it was so easy I might come back this weekend and do another..We also might put up a little bit of a pseudo-fence to frame in the area..dunno..we will have to see. 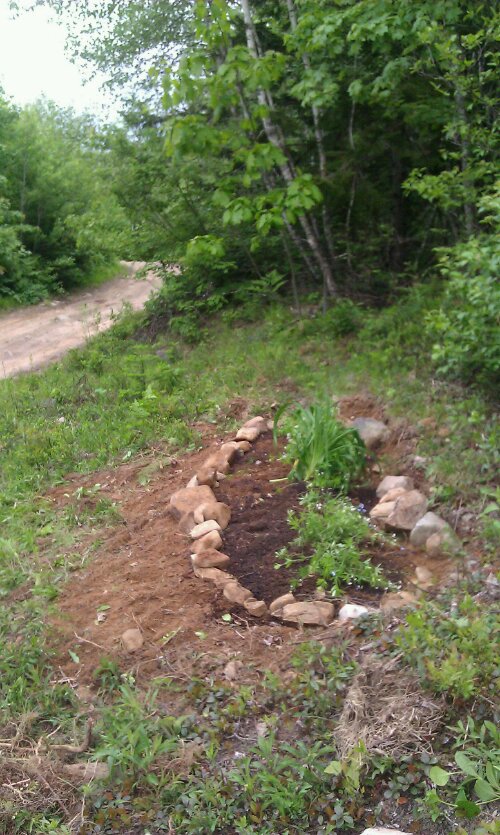 I will take the time now to tell you to the best of my ability what annuals we planted: ones with flowers. Yeah..annual names are not really my strong suit.

Small improvements..it also gave us some more ideas..not sure if that is good or bad…we are scheduled for MORE RAIN this weekend..we were spoiled  yesterday and today when it only rained for 1/2 the day yesterday and all day sun today. I hate to keep bringing up the weather but it is really unusual to have this much rain..and it really is wreaking havoc on my veggies.

Posted by eagergridlessbeaver on June 17, 2011 in Construction, Gardening

In local news 3 vehicles had to wait 5 minutes.

Posted by eagergridlessbeaver on June 16, 2011 in fun

Got a new tv

And my Bruins JUST WON THE CUP!! A massive 22 inch…it made Tim Thomas look as big as a Star Wars figure..uses 49 watts at 1.9 amps..little sips at the battery bank. YEAH!  I had to watch the finals on something bigger than the 5 inch black and white. YEAH! 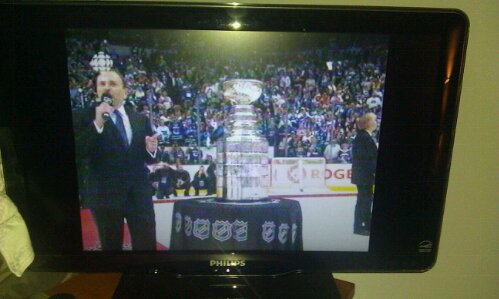 Posted by eagergridlessbeaver on June 15, 2011 in fun, Purchases