..happy halloween! .a fan favorite in our house is the living dead…people always say to prepare for anything so we try to prepare for a zombie invasion that will never come.this week we wanted to try to think like an undead horde so we tried to get into character! According to my zombie sensibilities our place needs more brains. Not many trick or treaters this year or any year..after 3 years we still have had none!

I am a zombie ( I stick to Elvis and the undead usually) and A* is a nurse from the Silent Hill video game/movie..one of the more memorable video games from the 90’s and a creepy movie which was pleasant suprise..if you like horror movies. Personally I like horror, not gore..unless we are talking politics now. As creepy as I looked A* was too spooky to go into stores so I had to run into a shopping center like this to pick up some things before a party..I got some stange looks..hehe.

I was also thinking…If zombies ever do rise up to destroy the world they should do it during halloween..while people are complimenting the zombies on their makeup the zombies can easily get within brain-munching proximity.

Posted by eagergridlessbeaver on October 31, 2011 in fun

..darg. ok wood burning season is here..no need to deny it any longer..so today A* and I set to cleaning out the stove, pipe and choppping wood..the 3rd p is for pro. Anyway, up on. The ladder I went..we try to do this regularly so we can do it all in about 1/2 hour. Off with the exterior stove top and in with the sweep brush…vigourously plunge the entire pipe length for 5 minutes..remove and replace the cap. Then A* removes the inside access for the pipe soot..shop-vac until clean…replace access cover…the end…and then we light it up..

Now we get to burn some of the crappier wood until the real cold weather hits! I must admit..it is nice to have a working oven again..I put some potatoes in there to bake in july and they still were not done! 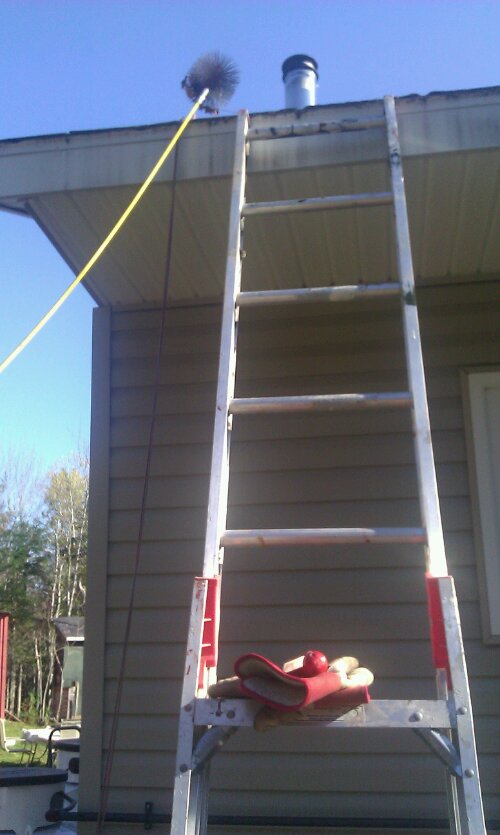 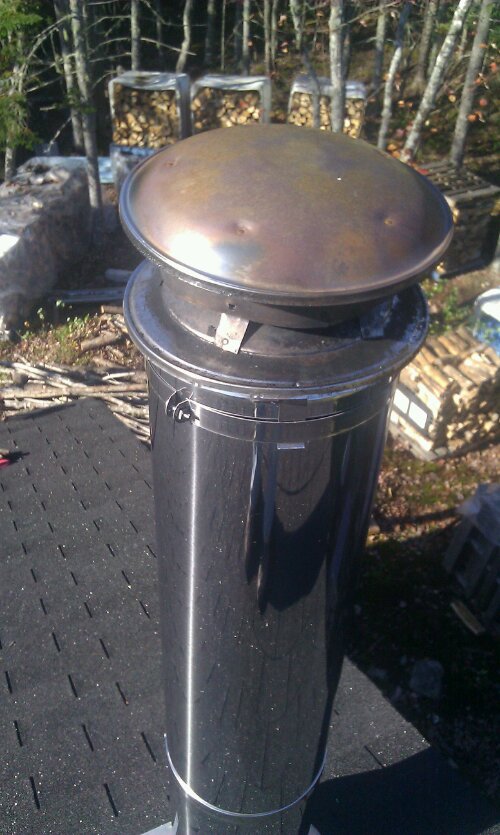 A* felt it prudent to make sure the oven still worked by baking up a batch of brownies..nice.

Posted by eagergridlessbeaver on October 30, 2011 in Construction, cookstove, heat

..hopefully the final version will be better..or as good.

Posted by eagergridlessbeaver on October 29, 2011 in fun

..getting cooler and cooler as the leaves fall off the trees. Loki, Jango and I run the loop in search of deer tracks and other wild critters..or their poop:

Loki is a great poop locator…she does not pull on the leash too much unless there is some poop worth sniffing..looks like something was eating a rabbit.

Personally, fall is my favorite season..not too hot, not too cold and very scenic..I just wish that spring followed fall.

Posted by eagergridlessbeaver on October 27, 2011 in Construction

Delivered wood stacking continues..the weather was warm and flying over the wood were these things..and they were EVERYWHERE..what are these? I never recall seeing them before but they look like small little flying cotton balls..little tufts undeneath with a blue color. We have about 1/2 hour left of stacking until we are done..again…but if these little buggers don’t stop flying up my nose I am going to lose it!! 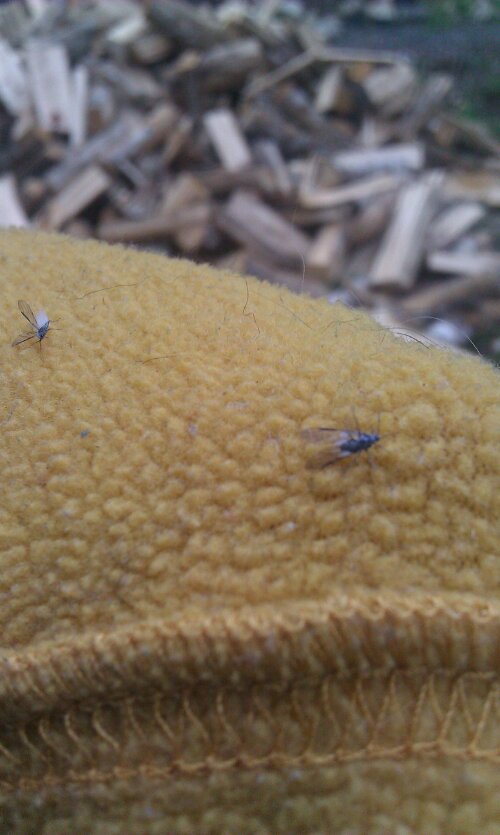 Posted by eagergridlessbeaver on October 26, 2011 in Construction

..just wanted a shot at one of the gates in the doubled up gates on the other routes into out place. This is the smaller of the 2 gates and is closed almost all the time too..especially during hunting season. The funny thing is that with all of the rain and rivulets running down this road/trail the gate seems way higher then it did 5 years ago..I used to be able to easily hop over it! 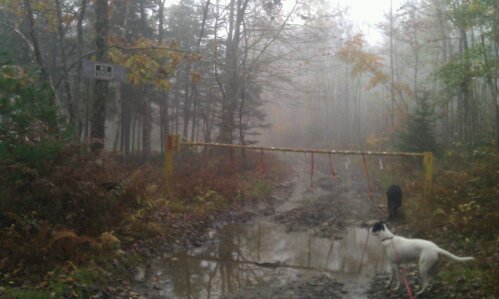 Sometimes it is hard to get a complete picture of everything I mention as without seeing it in pictures or me mentioning it how would anyone ever know? Most of this is in reponse to a post the other day mentioning the safety of my chain at the immediate bottom of my driveway…I still will be doing some minor adjustments but I wanted people to know there are other ( and better ) measures to prevent trespassing which are safe(r)…but with how drunk people are around here on occasion ( not me or A*!..mostly) I am not so sure anything is safe. I once saw a guy so drunk he tried to drink a cheeseburger.

Posted by eagergridlessbeaver on October 25, 2011 in security

Exaustion assists in teaching a 9 month old dog not to whine in the house.
Week one is now in the books with Loki..shes gotten off leash twice and cornered the free range chickens (no biting just cornering), chewed a scratch mark into the new flooring and boxed Jango nightly( she rears back on her hind legs and swats Jango in the muzzle ). Overall shes been great and has been responding to training wonderfully..it is more us who need corrections. We have needed to change our habits in making sure things are puppy-proof: couches covered (so the young excited errant claws don’t scratch the leather) ,leashing (has been an almost forgotten task over the last 5 years), new garbage can with flip lid, kennel living room as a focal point as well as my favorite:washroom breaks on the dogs schedule. On the positive side Jango and Loki seem to be getting along really well..still some trust issues but they have had no blowups. Loki could play for 12 hours in a row but Jango is no spring chicken and he has fun for a couple of minutes and then he wants out.
Loki is cute and has a good personality but it is all going to take time to get her where we are all comfortable..time and training..for everyone. These posts have nothing to do with being offgrid or anything but I want to document what I can. With our old dog Nova we were are already forgetting her ages and accomplishments and it would be nice to think we have these online memories to remind us now.

Posted by eagergridlessbeaver on October 23, 2011 in dogs

..hehe. At a music fest this week and taking in a whack of indie bands. Cool venues for tunes but so far my favorite things was one of the musicians who entered onto the church stage to start playing, ‘…well I have never played in an actual church before. SHhhhhhhh….don’t tell Jesus I only had Jamesons for supper..’. He seemed it but played like a fiend…between the meteor shower and bands every night I am exausted.

Posted by eagergridlessbeaver on October 22, 2011 in Construction

..hunting season starts in a couple of weeks and the traffic near my place has been 3 times as busy as usual..so 3 atv’s this week went by my place..mostly near dusk..this week 2 of them decided to use my private driveway..not that I mind sharing but I don’t like encouraging people to come to the area when I don’t know them, especially when they take my entry chains down..that is when thefts happen.  So I strung up some more orange tape so nobody accidentally drives into it..and a new ‘Keep Out’ sign so people won’t make a mistake and accidentally take the chain down..I don’t actually know how someone could accidentally take a chain down for the record.

Posted by eagergridlessbeaver on October 21, 2011 in Construction

The radiant of the Orionids is located between the constellations Orion and Gemini (in the south-eastern sky before dawn, as viewed from mid-northern latitudes. The most active time of the meteor shower will be in the early morning of October 21, 6 a.m. EST.

It is not nearly as active as the crappy Persied meteor shower from August ( during a full moon..not much to see ) and in a dark clear night you COULD see up to 25 meteors per hour…or be like me and see something out of the corner of my eye and turn my head in time to miss the meteor…everytime. It is nearly a full moon for this shower with the moon rising just after midnight..stealing some light..so get out early and hope for the best!

Most of this info is from wikipedia..but there are no actual meteors on that website..they are only in the sky!

…and I was up at 5:30..one of the perks of having a young dog..the conditons were not great due to the moon as I mentioned..hard to stand still and look for meteors with Loki as she is constantly trying to pull your arm off with the leash. So much to learn! Hopefully tonight will be better as I can sleep in tomorrow and stay out more during the night. 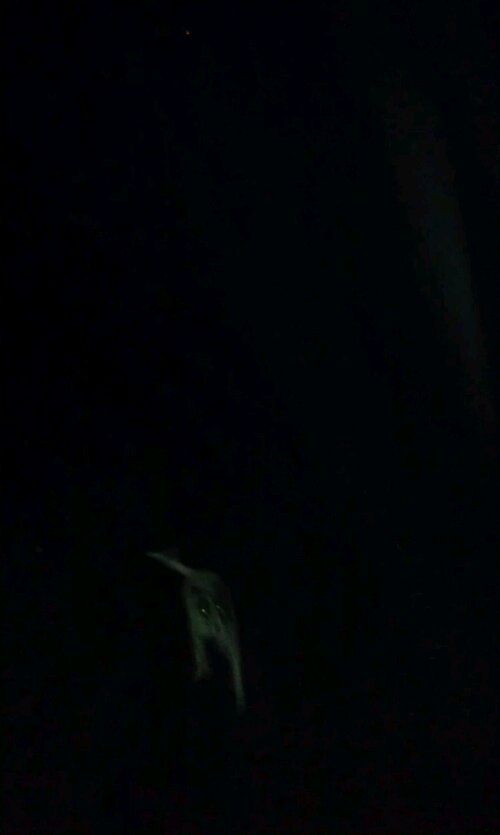 Posted by eagergridlessbeaver on October 20, 2011 in fun